August 1st marked the beginning of an exciting new Kickstarter campaign in the announcement of Necrocosmos. To be released on PC, Mac, Linux, PS4, Nintendo Switch and Xbox One, Necrocosmos is bringing a new spin to the Metroid formula, introducing survival elements with a splash of randomized progression. Put simply, players will be challenged to explore multiple planets with unique environments and inhabitants, but the developers claim that progression will be randomly generated from player-to-player. An ambitious idea that I hope can be delivered upon. Thankfully the developers have made it very clear that planets will not be procedurally generated, but handcrafted with care. 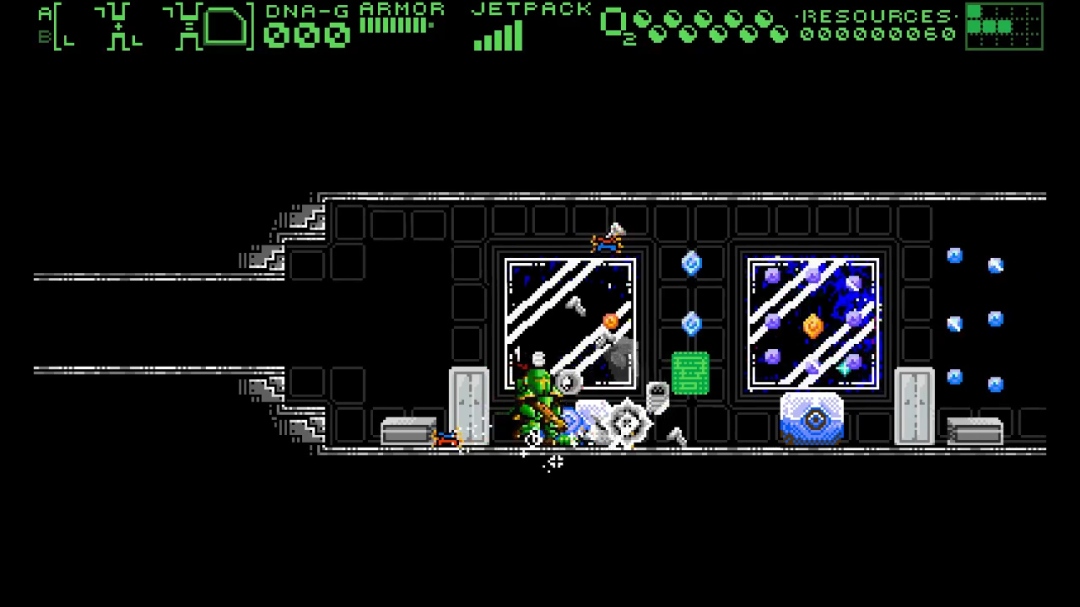 The masterminds behind Necrocosmos, Andromeda Project3, have designed a very thorough and intriguing campaign full of images, gameplay snippets, lore, and detailed explainations of gameplay features and stretch goals. Little is left to backer imagination and the project looks to be quite polished already. Even better is the option of playing a pretty meaty demo without having to pledge a dime. I’ve spent several hours with the demo and still haven’t completed it, for better or for worse.

Exploration of the planet on showcase in the demo is a treat and the narrative told through scavenged journal entries and the player character’s reactions to events is surprisingly entertaining. Not to spoil any of the events, but Metroid veterans will appreciate and feel right at home with the events that ultimately lead to exploring and meeting much more of the planet’s inhabitants than expected. Suffice it to say that gamers looking for a fair bit of lore to sink their teeth into will find a lot to love about Necrocosmos assuming the developers put as much effort and detail into the final product’s writing as they have crammed into the demo.

Exploration and gameplay is pretty vanilla out of the gate. Starting off with nothing but a short ranged rifle and jet pack, our hero isn’t particularly well equipped which allows for the tension of well designed survival games to shine through. A currency known simply as resource is collected through defeating enemies and destroying certain parts of the environment. Resources must be rationed wisely as they have heavy implications throughout. Upgrades to your suit are the most obvious use and can make a huge difference in empowering the players survivability in this inhospitable environment. Consider these upgrades a bonus as they shouldn’t be your first priority. Only through the expending of resources can players repair damage, save their progress, and even continue after death. The extra reliance on resources for such simple factors of gameplay adds a layer of tension that some players will enjoy, while others will no doubt loathe. 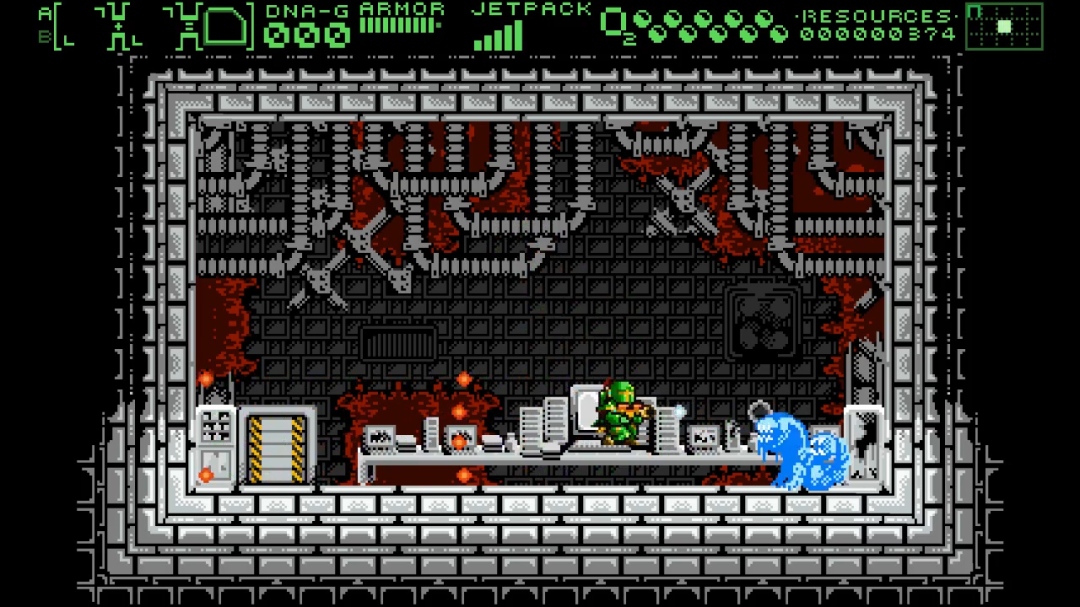 I have mixed opinions on the matter. I quite like the idea of juggling the importance of gaining a permanent upgrade, healing and saving. Getting a chance to save after a lengthy session of exploration actually provided a rush of satisfaction that most other games in the genre don’t. Every mistake has bigger implications as a player can’t simply farm a room of enemies to replenish health. Actually on more then one occasion I found myself having to chose between healing or saving, without the resources to do both. Necrocosmos is punishing at times, but ultimately smart allocation of resources will reward a player just as much as skilled play. I can appreciate this, but I can not appreciate the way resources are tied into continuing gameplay after death. Upon death, a certain amount of resources are required to continue from the last save point. This system did not bother me in the least for my first few hours.

But after several hours of exploration, gaining all of my suit’s upgrades and only a few objectives away from what I can imagine would be the demo’s conclusion, I died. No big deal. This had happened many times and it was my own fault for exploring while on low health. The game asked if I wanted to continue and of course my response was yes. I was having a blast and wanted to continue playing. It turns out that I didn’t have quite enough resources to continue. At this point I was placed at the beginning of the planet with all of my progress reset. No upgrades, zero map completion, nothing. To just lose that much progress, I had to turn the game off for a moment. Hoping to continue again, I booted up the game and found to my horror that the Continue option wasn’t selectable from the menu screen. All of my progress gone. Unfortunately I couldn’t gather the motivation to start again. I hope this isn’t a feature that will make it into the final build of the game. 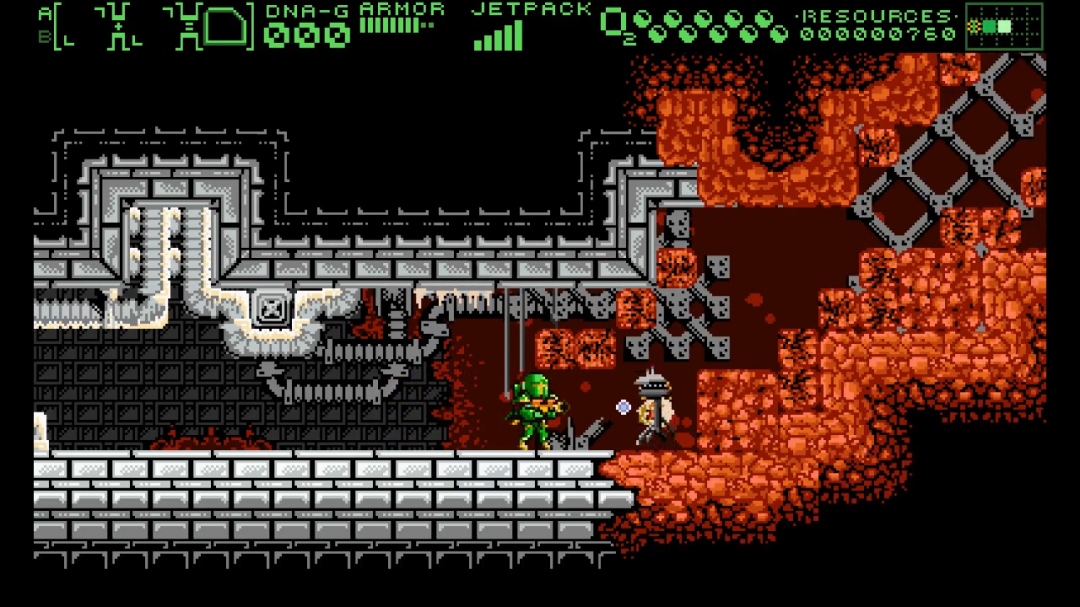 This left a permanent bad taste in my mouth after several hours of very enjoyable gameplay. I can’t imagine that having to restart the entire game will be an issue with the final product. Even expecting players to re-explore entire planets/levels is not going to sit well for most gamers. Sure, keeping enough resources stashed away can afford a guaranteed continue, but what about situations where a player finds themselves in a tough situation where they are facing death-after-death? Resources will eventually run dry and they’ll have to potentially replay a good portion of your game? Certain players will feel rewarded by replaying and overcoming the odds, but others will likely walk away in frustration. That’s exactly what I did, even if I tend to find myself in the first camp. Replaying 15-20 minutes worth of a game is acceptable, replaying several hours isn’t.

Necrocosmos does so much else right that it’s hard to not recommend it to any fan of the older generation of exploration games. Fun touches like the vertical space shooter segments when traveling between planets and the collection of journal entries to solve some of the more insidious riddles are just great bonuses. One of the games most touted features hasn’t even been touched upon yet, the DNA gun. Destroying adversaries doesn’t simply reward resources, but also, on occasion, the enemy’s DNA. By collecting and combining different DNA types, the player can wield various forms of firepower. While only a handful were available to test, most create unique firing patterns and even the ability to bypass certain barriers found throughout the map. Alien vegetation blocking your passage? Create a flamethrower and clear the path. Players will only have a limited amount of shots per combination, but the ability to switch between two weapons on the fly will allow for saving precious ammo until the time is right. Yet another flaky layer of survival and problem solving.

As of the publishing of this article, Necrocosmos has 16 more days to hit its $53,000 goal and is almost halfway there. Necrocosmos has a wonderful premise and clearly a very passionate, talented team behind it. If you are at all a fan of the Metroid franchise and want to support more games like it, I highly advise you to look further into the Kickstarter campaign, spend some time with the demo, and take a chance by backing a worthy project.
Check out the Kickstarter and let us know what you think of Necrocosmos in the comments section below.

Excited to finally pickup this title in physical form. It’s been tough to hold off on just downloading but I think the wait was worth it! #MortalShell
Finally arrived today! #Bloodstained Collector’s Box. Thanks #Iga and team for a wonderful gaming experience and an epic display piece!
Congratulations to #FrejaandtheLostProphecy for hitting its #Kickstarter funding goal this New Years Eve. One more reason to celebrate this evening for the devs and #metroidvania fans around the globe. https://www.kickstarter.com/projects/1769906085/freja-and-the-false-prophecy-norse-platforming-gam
When you go to the store for one thing. #Metroid #pokemonletsgo
5 years in the making. Timespinner is now available on Steam/PS4/Vita. Go pickup your copy today and support an incredible Indie developer! #metroidvania
Never thought I’d see the day. Can’t put my excitement into words for this one. #Bloodstained #curseofthemoon #legendary
With less then 2 hours left in the campaign, Beyond Human needs our help. All Metroid fans should take notice of this excellent title. #metroidvania #metroid #kickstarter #48hours #breakablewalls
The Kickstarter campaign for Necrocosmos unfortunately did not quite hit it's funding goal. Hopefully good news will come out of the developers announcement about the future of the title tomorrow morning at 9am PST #necrocosmos #kickstarter #metroidvania
This one has seen better days! Hopefully the new Amiibos can summon Mr. Clean. #samusreturns #metroid #amiibos #breakablewalls https://breakablewalls.com/2017/08/25/metroid-samus-returns-overview-trailer/
Bloodstained Community Broadcast E16 is up on YouTube - Interview with 505 Games. https://youtu.be/ICAOjh1ttrg #bloodstained #505games #breakablewalls